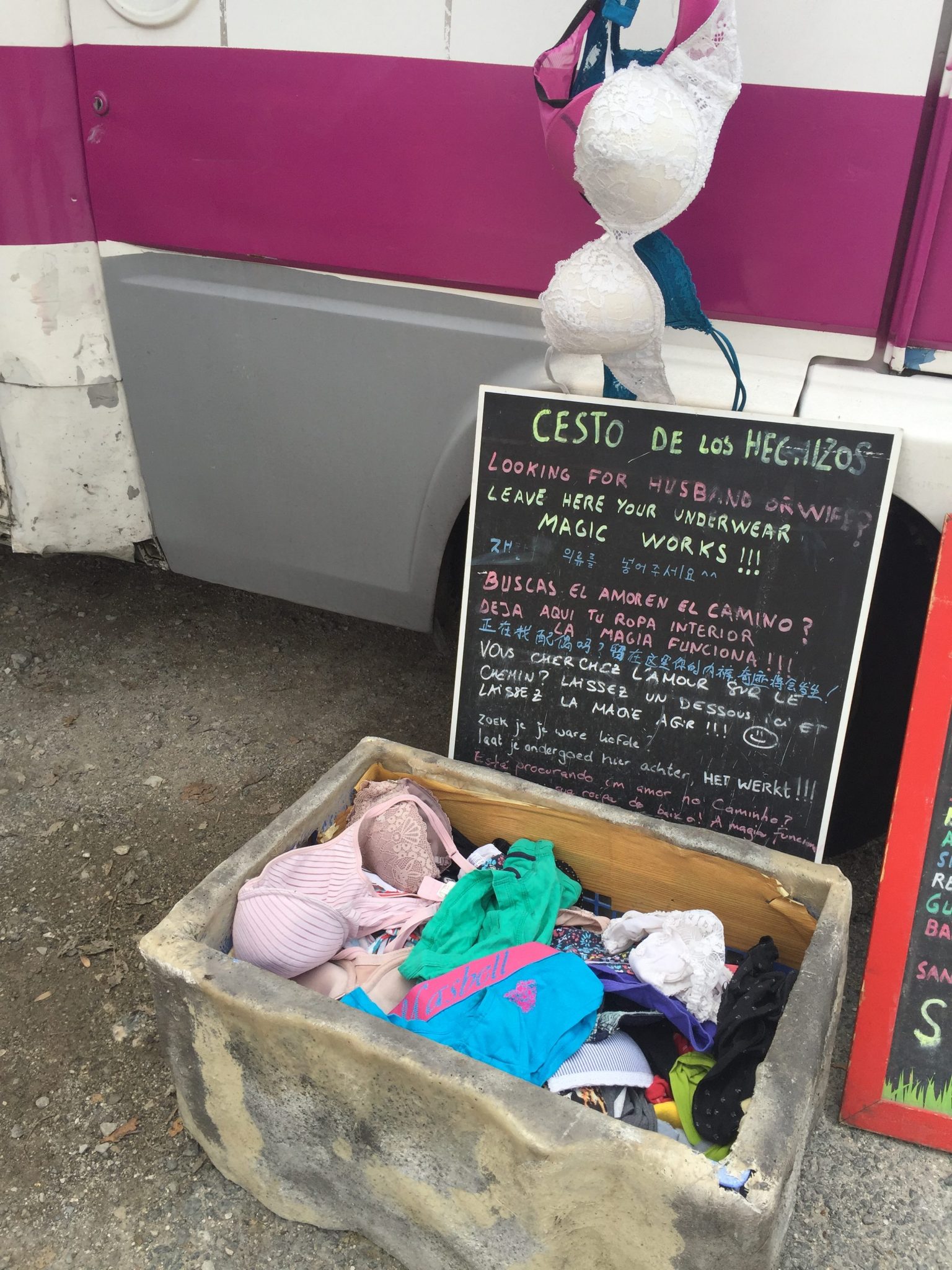 I had already been walking 7 hours, 15 miles and 36,000 steps and hadn’t come across a village (or café!) for the last four hours! In the distance, I saw a mirage in the form of a food truck set up by the side of the Camino road for pilgrims. I knew it was real when I recognized a young woman from Liverpool I’ve crossed paths with along the way. I’ve never had a conversation with her so I sat down beside her and drank my café con leche as she smoked her smoke. 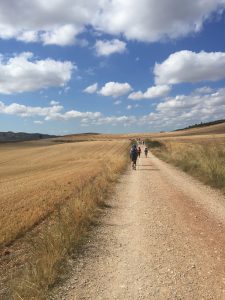 She asked me where Claus was. I told her that he was almost two days ahead of me. She looked shocked, “You aren’t walking the Camino together?” I explained that we had separated a few days ago. “Oh no! I’m so sorry,” she exclaimed a bit more dramatically than felt necessary until it became clear that she thought we were “partners.” I cleared that up, “Oh, no, we only met in Orisson.” She seemed relieved but also not, “But, you seemed so natural together, like you belonged with each other.” I laughed and said, “Yes, we did feel like old friends, but that’s all.”

“You should have thrown your panties in the basket,” she stated matter-of-factly. Now, hang on a minute and let me explain that response. A few days ago, at a similar food truck, there was a basket sitting by the front tire. The sign explained that, originally, the basket had been set out for pilgrims to discard anything they no longer needed or wanted to unload from a heavy backpack. One day, a young woman threw a tiny pair of panties in the basket. (Backpack weight is a real thing, folks!) Legend has it that she met her soul mate a few miles down the Camino and they got married and lived happily ever after. Ever since then, women (and, I suppose men) have been tossing their lingerie in the basket hoping to tap into this Camino magic. 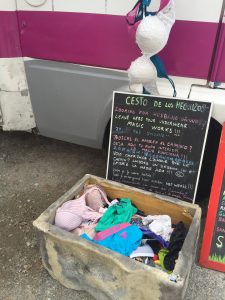 I chuckled and answered her question, “No, I couldn’t afford that kind of magic. I only brought two pair of panties. At this point on the Camino, I need an extra pair of underwear more than I need a man.” I asked her if she had tossed in a pair. She retorted quickly, “I would have but I don’t wear panties so I don’t even have one pair, much less, an extra pair to toss in there.” I asked her if she had a partner back home. She chortled, “Oh, God, no! I don’t like commitment. That’s the same reason I don’t wear panties. They confine me. I certainly don’t want to feel trapped by a man!”

(Footnote: the rest of the pictures have nothing to do with the text  I just wanted to share the food and fun signs the Camino has been giving me along the way.) 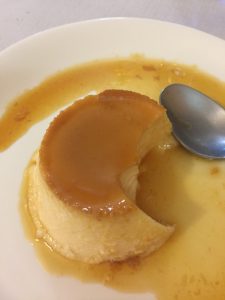 This conversation lightened up my last steps considerably until I finally stepped foot into Los Arcos and found my albergue. Actually, I was staying in a pension tonight (which is similar to an AirB&B.) I had shipped my backpack ahead to one pension but after running into my friends from Ireland earlier in the day I had decided to switch to where they were staying for the night. Once I arrived into the little town, I made my way to find my backpack. There was a note explaining the owner was at her children’s school and for me to walk two doors down to get the key from her mother.

I knocked on the door and an older woman, eating a chocolate-dipped ice cream on a stick (when it wasn’t falling to the floor in pieces,) answered and couldn’t speak a word of English. After playing charades, she finally understood that I needed the key to her daughter’s pension. She put up her hand and “told” me to wait. She ran upstairs, got the key, motioned me to follow her, I stepped behind her, closed the door and walked onto the street. At which point, she whipped around, threw her hands up in the air and, I’m fairly certain, proceeded to cuss me out in Spanish. 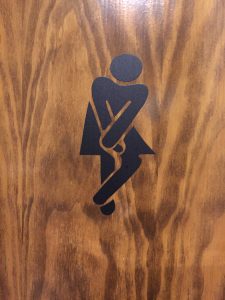 From what I gathered from the hand motions, I had just locked her out of her house and she didn’t have a way to get back inside. For the life of me, I couldn’t figure out what the hand motions would be for “I’m so sorry!” I tried praying hands. I tried getting down on my knees. It didn’t matter. All she understood was that she was now stranded outside on the street. I handed her my cell phone to call her daughter but she waved it away (rather vehemently.) I walked toward her neighbor’s door and made the universal sign for telephone (you know, the thumb and pinkie finger spread open by the ear.) That was obviously the stupidest idea the old woman had ever (not) heard. She scolded me in a language I understood perfectly.

A man walked down the street and I asked him if he spoke English. She ran up to him, pushed me away and started talking/shouting ninety miles an hour. He calmed her down and then he calmly reached into his wallet, pulled out a credit card and broke into her home. She kissed him on both cheeks and gave me another dirty look. I wish I had pictures to show but I didn’t dare ask her and I didn’t think he would want a mug shot so soon after breaking and entering. 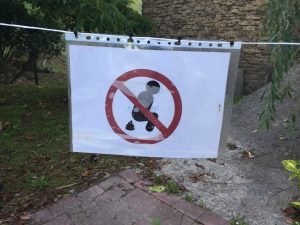 I stealthily snuck up the stairs, stole my backpack and left the scene of the crime. I found my friends’ pension and proceeded to check in. There was a very handsome young Spaniard (is there any other kind?) manning the front. I told him what had happened and with a twinkle in his eyes he said, “I’m glad you decided to stay with me, tonight.” Flustered, I said, “But, I do feel kinda guilty for not staying after having my backpack dropped off there.” He replied, “But, you can be bad sometimes, no?” As not-so-nice as that sounds, it actually felt like another Camino message for me. Sometimes, it is okay to look out for myself, even if it is at the expense of someone else. That feels like heresy to even type it but I know deep down there is a place for this truth, too. And, the fact of the matter is, it didn’t cost the other pension to have my backpack sit on their floor and it would have cost me an evening with my friends had I not been able to be a little “bad.” 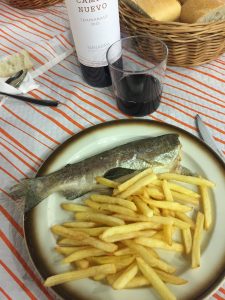 As the Spaniard (that feels so much sexier than simply calling him the front desk guy) continued to check me in (and out,) he asked me where I was from. I answered, “California.” He lowered his voice and his eyelids a bit and whispered, “Will you take me home with you?” I laughed nervously (or I may or may not have even giggled girlishly.) He asked me if I wanted the Pilgrim’s Dinner and breakfast in addition to the room. I told him that I would be going into the little town for both. He frowned petulantly and argued, “Oh, but I wanted to make breakfast for you in the morning.”

I was beginning to let all this attention from such a handsome and young suitor go to my head when he picked up my passport and looked at the picture and said, “Is this you?” I smiled and nodded with feigned humility. He looked confused and explained, “This no look like you. Maybe after a shower.” 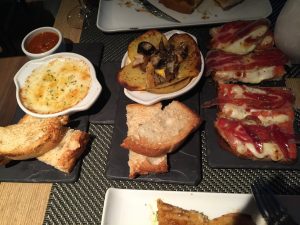 Sure, it’s been a long, hot day of walking but, really, did he have to be so honest?! On second thought, maybe I should packed an extra pair of panties to toss into the Camino Magic basket. Apparently, I could use the extra bit of luck. Nah…even a handsome young Spaniard would not be worth carrying the extra 2 ounces. 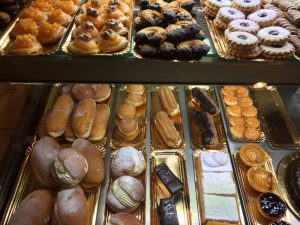 I hope you’ve enjoyed the lighthearted stories and pictures today. I feel happy.