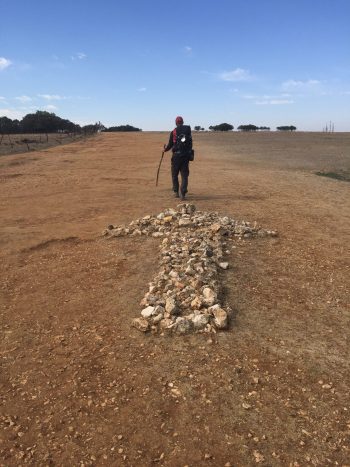 The night we slept in the church tower, we had arrived in the late afternoon. The hospitelero directed me to the top of the tower into a stone attic where there was a sink and some soap to wash my clothes. She then pointed me to a school yard around the corner of the town square where I could hang my clothes to dry. The next morning, I walked through the little village in the pitch black dark of morning, felt around for my clothes and found them – still wet! I had no choice but to safety pin my wet socks and sports bra to my day pack and walk in my sandals, “hangin’ loose” until the sun came out enough to dry my clothes. (TMI?) 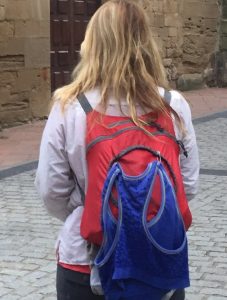 While the morning was still barely peeking out from under the covers, not quite ready to get out of bed, we walked. And we talked. I asked Claus, if he could have a conversation with any person alive and any person dead, who would it be. He chose Obama and Nelson Mandela. After he shared with me, what he would want to ask them, I did something I’ve never done before but it just felt right and fun to try it. So, I told him to take a few deep breaths and tap into the energy of each man and I would ask them the questions he wanted to know the answers to. The “conversation” went on for miles but I’d like to share a few of the nuggets. 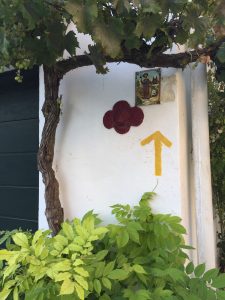 “Nelson Mandela” helped Claus understand that the great things he did while he was alive were accomplished in the middle of the fear. He felt the fear and did it anyway because the desire for freedom for all was greater than his fear. “Obama” shared that although he was “bruised” after these last eight years of battle with the world powers opposing him from all sides, he had made it through with his sanity intact because Michelle had been his anchor and safe haven. She was his world and it was unshaken. 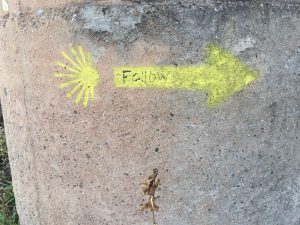 Now, it was my turn. The two people that popped into my mind that I would most want to talk to were Julian of Norwich and Thich Nhat Hanh. Within our conversation with Julian, I realized that I had limited the portal to the experience of oneness with God as only suffering. Claus helped me see that, perhaps, I was more afraid of truly living freely and fully and that to surrender to that fear and go through it and dare to enjoy abundant life would be more suffering for me than to carry the cross of death that I no longer needed to carry. 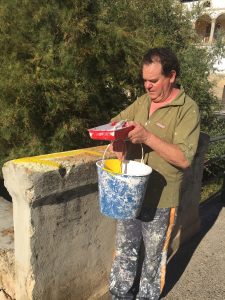 He asked Thich Nhat Hanh what he could do to create more peace on this earth. Thich/I answered, “You’ve phrased the question incorrectly. It’s not about what you do, it’s about being. You be the man from the inside-out that you are and you will inspire others to desire that inner peace they see in you and that will give them the faith to believe they can experience it for themselves. Peace on earth only comes from peace within each person on earth. Be that peace. 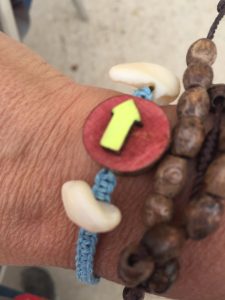 Eventually, the sun showed up, and it made its presence and power known. It was a very hot day. Claus and I both felt the desire to allow the stirred up dust from walking the Camino to settle a bit more in our souls. We spent most of the day enjoying walking alone together. Simply following the yellow arrows. That has become a key lesson for both of us. We don’t have to know where we are going. We don’t have to know how we are going to get there. All we have to do is pay attention, watch for the next yellow arrow, trust it and follow it to the next one. Whether it is in a few hundred feet, meters, kilometers or miles, we will look up and realize each arrow has guided us to where our hearts saw before our eyes even knew what to imagine. 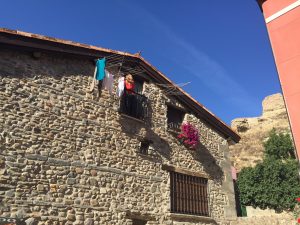 And, at the end of this day, just after the last yellow arrow, I was brought to the coolest, cutest, most perfect clothes line I’ve ever encountered. Just what I needed. So, I washed all my clothes, hung them out my window to dry and woke up to breeze-blown, sun-dried clothes that smelled like earth. Sometimes the arrows lead us to what we’ve been searching for and sometimes they lead us to stop searching and enjoy the simple things that we almost missed that are all along the way. 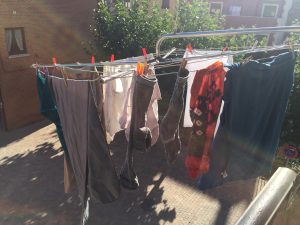