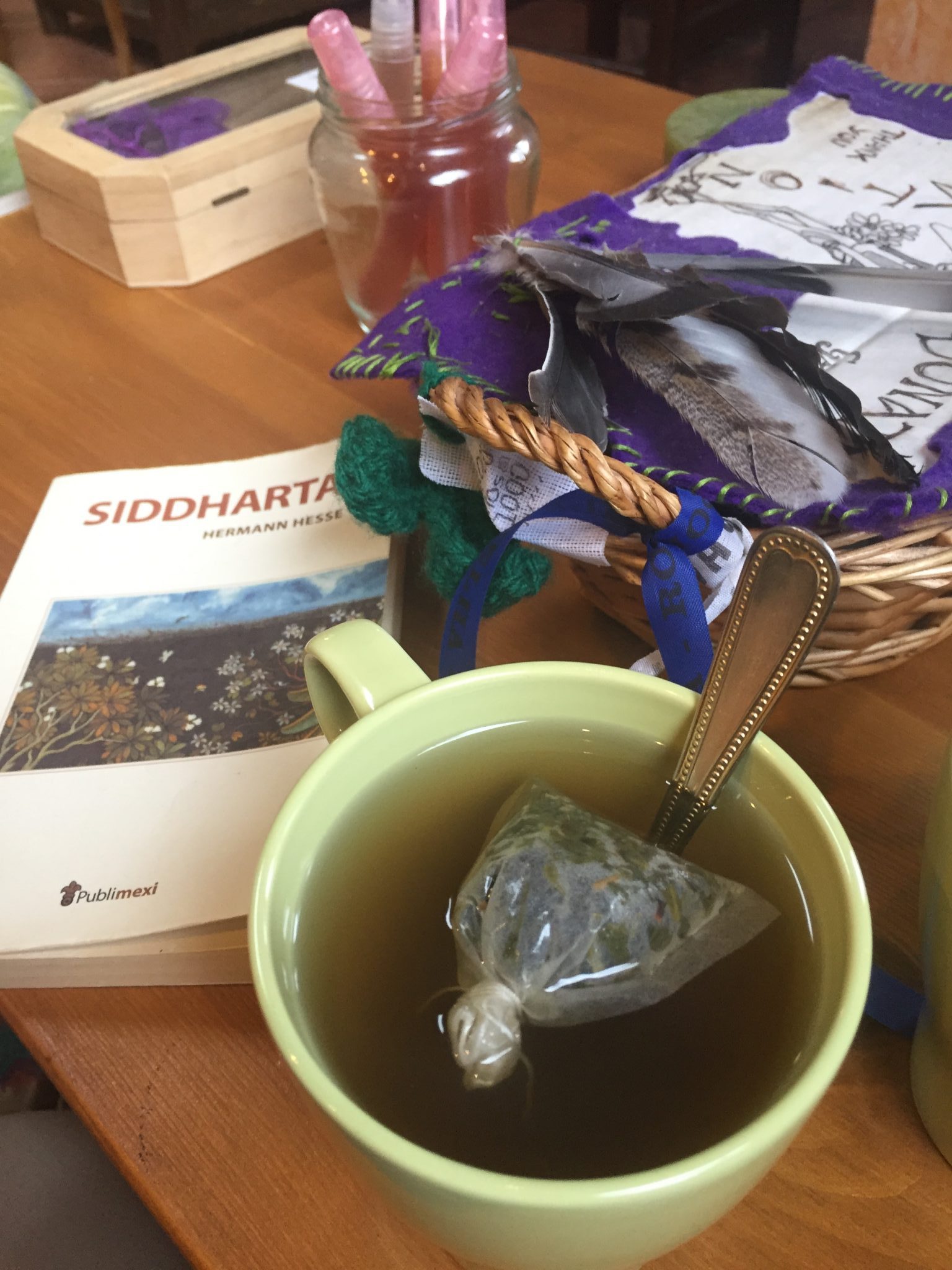 I have to tell you about my favorite albergue so far. It is about 30 kilometers outside of Leon and it was an oasis. The name of it is “Albergue Verde” and it is straight out of the Sixties. I knew I was in for a treat the minute I stepped in. 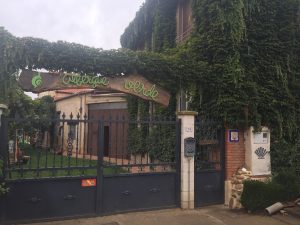 They had a bookshelf dedicated to hot tea-making. While the hospitelero heated water for me she directed me to all sorts of jars of loose tea, recyclable tea bags to fill, spices to add and raw local honey to sweeten. It was a rainy day so it couldn’t have been a more welcome welcome. After stamping my Pilgrim Credentials, she showed me a cozy corner covered in pillows, strewn with books and surrounded by candles. 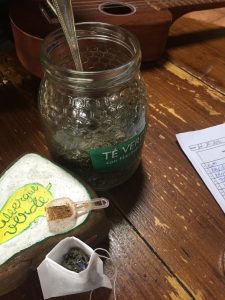 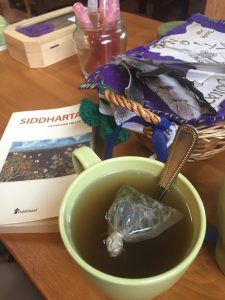 Many of the pilgrims had so fallen in love with the place that they had been staying for days and they welcomed me into the family even though they were all much younger than me. I sat on the cushions and wrote a bit in my journal when I looked up because we were all being serenaded by a three-piece band, complete with upright bass, ukulele and guitar. I recognized the song as “A Whole New World” from the Disney movie, “Aladdin.” I knew then I was in Heaven. 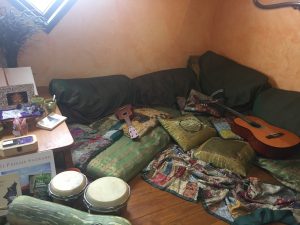 Now, it was time for yoga. We all squeezed into a tiny room downstairs and enjoyed a two-hour class that combined yoga, meditation, stretching, chanting and even a tiny bit of tai chi. The instructor was a hoot. He had studied in India, he barely spoke English and he loved to laugh. He even had us do some “laughing yoga.” It is freaky how this actually works. Although, I had been feeling tired and achy and overcast on this rainy day, by the end I felt like I could have walked another 20 kilometers! 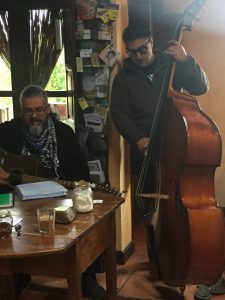 But, I wouldn’t have wanted to miss the best meal I’ve eaten on the Camino. Granted, I’ve enjoyed first-class places, fancier gourmet dishes and more romantic memorable moments over meals but this food was my favorite. At home, I eat very healthy and rarely eat meat at all. As much as I’ve enjoyed all the carbs, sugar, coffee and wine on the Camino, my body systems have not been as enthusiastic about this departure from organic food. I could just feel my body kissing me from the inside-out as they served lentil and vegetable soup made from all the produce grown on the property in their garden. Even the bread and dessert was whole-grain and sugar-free. 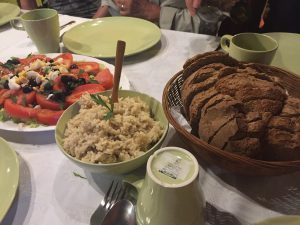 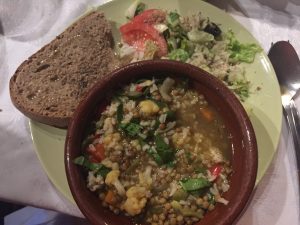 After dinner, we were serenaded again, although, this time they added an accordion. Everyone sang along and even though I didn’t know the words (even if I could’ve spoken the language) I was swept up in the music and spirit and somehow knew they were singing about the Love that transcends language, religion, age, or who we are or aren’t off the Camino. 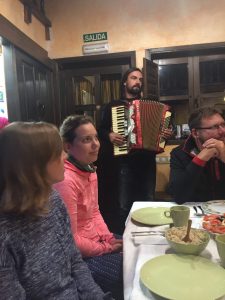 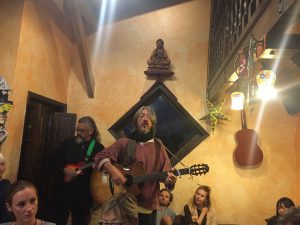 I would have said it was a perfect place to stay except for one glaring, unforgivable sin – they served instant coffee at breakfast! I made a quick escape while it was still dark and made it to the next town for my addiction fix just as the sun was rising so all was right again with the world. 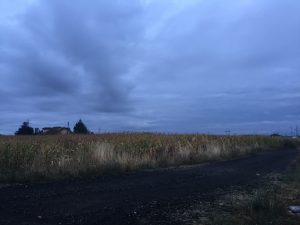 Maybe it was the rough start but the day went downhill from there. It turned out to be the hardest day of my Camino so far. It was threatening rain and the wind was briskly blowing the cold air across my face, chilling my nose and freezing my ears. I lost my favorite Buff that Haven and Aaron gave me for my birthday but, thankfully, Claus left me his to use. Even so, I was numb to the bone as I made my way toward Astorga. 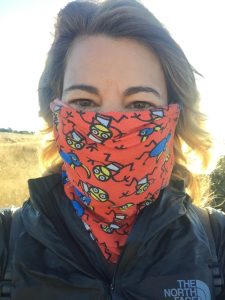 The bright spot of the day was a little sanctuary set up at the top of a hill by a man offering a “gratis” juice bar. He had a box for donations but you could tell by all the little areas he had set up for weary pilgrims that it was offered truly free of charge from the overflow of abundant kindness in his heart. 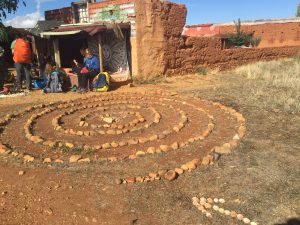 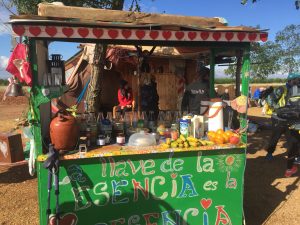 I checked into another pension and have spent this evening sitting in the living room with an older woman who only speaks Spanish and her grown daughter. We have been watching Spanish TV by the fire. We haven’t spoken a word but it feels good to be a part of a family on this night when I am missing mine so much.