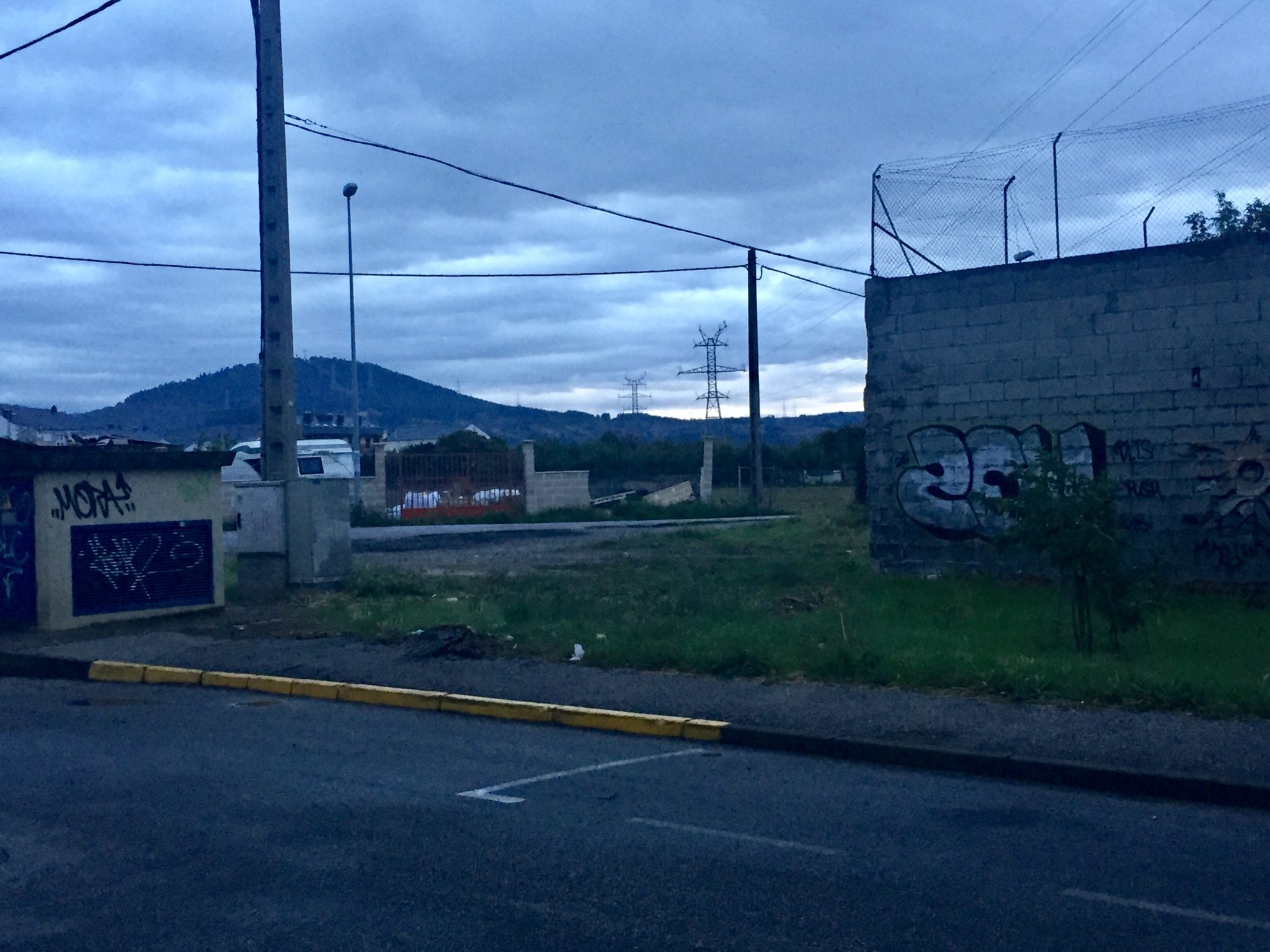 I am enjoying leaving before daylight each morning. One of the things I will miss the most is witnessing the sunrise each morning as it illuminates a new landscape each day. It never ceases to steal my breath and replace it with overwhelming gratitude and praise.

I left Ponferrada just as the sky was turning grayish blue from blackish blue. I had read that it could be confusing finding the yellow Camino arrows out of the city so I was paying extra close attention. I even stopped and asked a man on the street to make sure I was heading in the right direction. I recognized the one word “Camino” in a slew of unrecognizable Spanish words but then he gave the universal sign for “keep heading straight” so I followed his instructions…right into the middle of what looked like the worst part of the underbelly of the city. 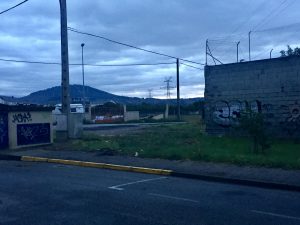 “Toto, we are not on the Camino, anymore.” The sun was now up but the rain was now coming down. I noticed goose bumps popping up on my arms and it had more to do with my looking behind me to make sure I was not being followed than it did the cold air. I was officially afraid. I had no idea where I was but I knew I wasn’t where I was supposed to be – or where any woman should be alone. I connected to Google Maps and saw how far off course I was and what it would take to get back on track. So, I extended my invisible force field of power and protection, I prayed and I walked on until I intersected with the Camino about an hour later. Here’s the good news, though. I think I accidentally took a shortcut! 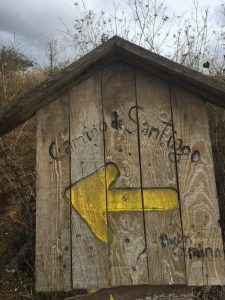 My heart was still feeling as overcast as the sky. I can normally bounce back more quickly from the interior cloud cover but these “blues” have lasted almost four days this time. So, I decided to lean into the loneliness and allow it to be my teacher and I submitted to the lessons it wanted to work in me. I experimented with not resisting anything, even my so-called “negative” feelings of sadness, confusion, frustration and fear. At the same time, I opened up to the full presence of God’s love that is truer than my feelings. 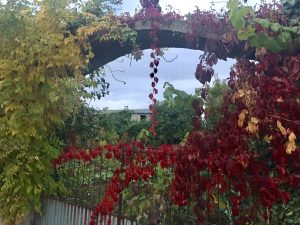 It felt amazing. Almost like I was porous and the Spirit of God could flow right through me. I felt so light. I realized that when I don’t attempt to figure out the future or find ways to get one step ahead of potential pain or do whatever possible to keep things from getting messy then I can enjoy all that is available and wonderful in the present moment. It feels so much better to be grateful for what is right now, welcome whatever is reality and trust that I will have all that I need to cope with anything in the future that I am now trying so hard to control and manipulate. So much wasted energy that is taken away from enjoying the gifts that are right here and available to enjoy in the “now.” 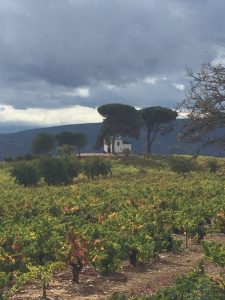 This bearable lightness of being lasted until I was about 8 kilometers from Villafranca del Bierzo, which was my stopping place for the day. Then, the heaviness set in again. I could physically feel the weight of the depression on my shoulders and back. My legs felt like I was trekking through mud and my feet ached so much you would think I was carrying an anvil in my daypack. I arrived at my albergue and was led to my bunkbed on the third floor. There were 16 beds in one big room and 12 of those beds had men sprawled out on them – some of them in their whitey-tighties! Plus, all of their hiking boots were sitting on the floor by the beds. I knew I was not only going to need ear plugs for tonight but nose plugs, as well. 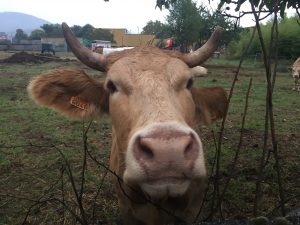 I couldn’t wait to get out of that town so I was the first one out the door the next morning and walked into the dark of the night again…and, proceeded to get lost – again. As I mentioned weeks ago, I need a GPS to navigate my apartment so walking 500 miles across Spain in the night is nigh impossible. Thankfully, a nice French man intercepted me before I headed down the exact opposite direction. It was win/win for both of us. His headlamp battery was dying so he stayed with me until daylight when we reached our first opportunity for café con leche. 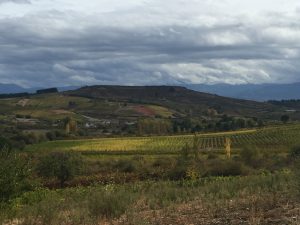 Last night, I determined that I really needed a hot shower and a good night’s sleep so I called around 10:00 PM to reserve a room in Vega de Valcarce at a Casa Rural, which is basically a bedroom in someone’s home. This morning, while I was drinking my coffee, a woman sat down beside me and said, “Okay, I recognize you and I gotta ask – which was harder, “Survivor” or The Camino?” (For the record, as hard as the Camino has been at times, it is a walk in the park compared to “Survivor.”) We got to talking and she told me that she was going to ride a horse up the mountain tomorrow. —- Whaaaaa?! I want to do that, too!!! 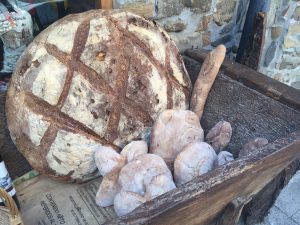 But, this meant I had to walk farther than I had planned today. I called ahead to the Casa Rural to cancel my reservation but the woman didn’t speak English so I couldn’t. No problem. I was making great time and was going to get there in plenty of time to release the room for other pilgrims. At least, that was the plan. Once I arrived, the woman I tried to talk to on the phone would not give me my backpack that had been transported ahead there until I paid her for the room in full. I know this because there was a sweet girl in the front room who was translating for me. She was appalled. She rose to my defense and told the woman that she was being unreasonable. She explained that I had tried to cancel. She had plenty of rooms still available. It was early in the day. And there was nothing in writing about a cancellation policy. Nothing made the woman budge. 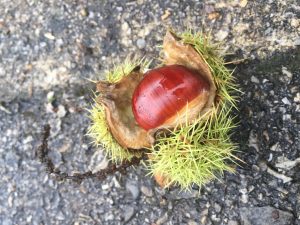 This had now turned into a hostage negotiation as this lovely young woman made a deal with the woman to hand over my backpack in exchange for me paying half of the room cost as ransom. She retrieved my backpack from behind the desk and I did the meanest thing I could think of…I typed into my Spanish/English translation app the words, “I’m going to leave a bad review on TripAdvisor about you!.” So there. That will show her. 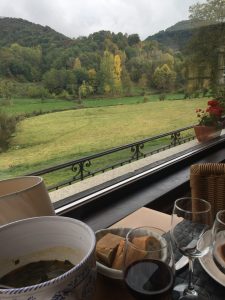 I am happy to report that I am now sitting by a fire writing this blog overlooking this lovely view after a hot shower. I’ve had a chance to talk to all my kids, Steve, and Claus. The skies are clearer in my heart than they have been in days. I’m now ready to ride off into the sunrise on a horse in the morning.