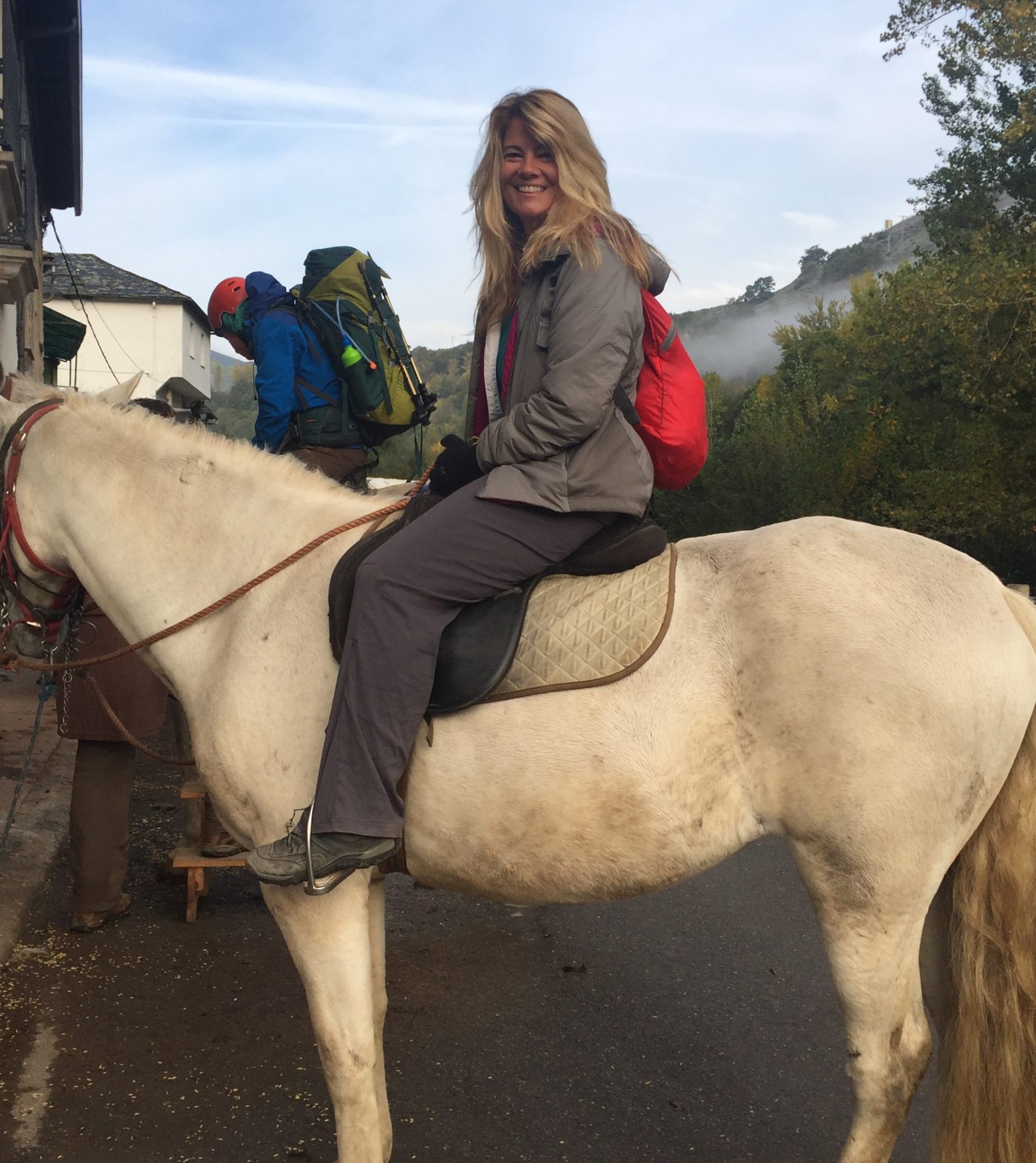 How much fun today was! And how different it was than all of the previous days – in so many ways. For starters, I rode a horse up the mountain instead of walking. That was great for any number of reasons. First of all, it was a 700 meter ascent after it has been raining off and on for the last two days. So, I avoided the muddy, rocky, steep climb. Can’t beat that. It was also just plain fun. Being a Texas girl and having owned my own horse as a teenager, I feel at home in a saddle. I just wished I could have galloped up the hill a bit. And, the scenery was exquisite. We climbed so high that we were actually riding inside of a cloud at one point. 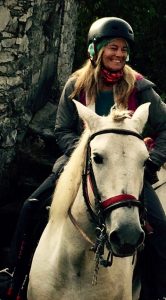 It was interesting to me to hear the variety of reactions from the various peregrinos we passed along the way. Sadly, many of them seemed to really have a hard time with our joy and ease. Many of them said things like, “Oh, that’s cheating.” Or “Taking the easy way, huh?” Or “That’s not a real pilgrim journey.” Thankfully, there were a few that were able to join in with our joy and wanted to capture it on their iPhones. Smiles were contagious from us to them and vice versa. 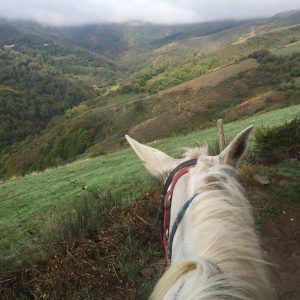 I didn’t let the “Scrooges” affect my giddiness (or would that be giddyupness?) I was having too much fun. This didn’t feel so much like cheating as it did expanding the experience to include an additional adventure. That has been a theme for today. Because I chose to take a different mode of transportation it opened up a whole new realm of possibilities that I may not have had access to experience had I taken the traditional Camino road. 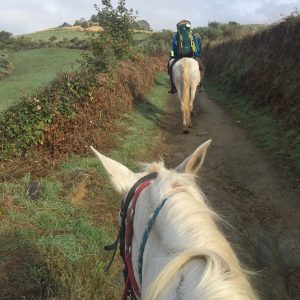 Even something as simple as the fact that I wouldn’t have met Victor, the horse wrangler. After our ride, he took us to his favorite little spot at the top of the mountain, a tiny café next to a church. He insisted on ordering for us so we all ate cabbage and potato stew served out of a pot the size of a small round dining table. He also gifted each of us with a shot of some kind of liqueur that tasted a lot like cough medicine but we all pretended to love it. I have a Twitter friend who told me to be on the lookout for “cow cheese” drizzled with honey in this region and they had that on the menu, as well. Oh my. That would even be worth climbing up the mountain on foot for! 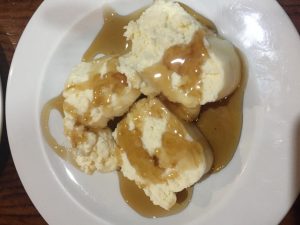 Victor shared his story over café con leches. He used to be an economist working in Madrid for over 30 years until two of his friends died of a heart attack. He had also been on the phone trading money with colleagues in the World Trade Center on 911. Four years ago, he realized he not only wasn’t really living, he was probably slowly dying so he quit his job, bought six horses and moved to this tiny village at the base of this mountain. Now, he rides horses everyday in this gorgeous scenery and meets interesting people from all over the world. He feels like every day he takes a deep inhale of the breath of life again. 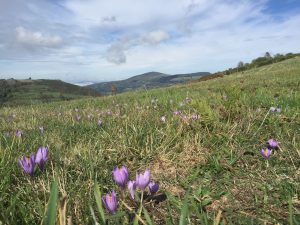 As we left the tiny mountain village, I still had another 10 kilometers to walk to my stopping point for the day. For the third day in a row, I got lost heading out of town! But, I eventually got back on track and realized that I have never technically been “lost;” I’ve just veered off the beaten path. Choosing the road less taken, if I want to get romantic about it. And, I do. There is a song on James Taylor’s Christmas album that talks about God speaking to the Wise Men in a dream and telling them to “go home by another way.” There really is something God-directed about that kind of thing.

I once read a book that talks about how our brains like to stay in ruts because it uses less energy. They prefer synapses to fire in the ways they are used to connecting because then they don’t have to metabolize as much to think a new way. This book suggested doing simple things like brushing your teeth with your non-dominant hand, walking into the next room backwards or going to work on the side roads instead of the freeway. All of these tiny ways of approaching life in a different way expand our creativity and capacity for seeing things from a new perspective. We go from auto-pilot to actual being awake and conscious. 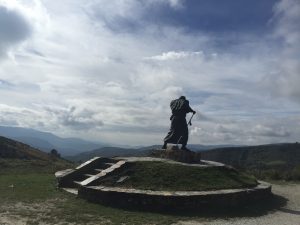 I ended up continuing this theme in choosing the place I’m staying tonight, although, I didn’t even realize it at the time. When I told Victor where I was staying tonight he said, “How in the world did you end up there? It isn’t even on the Camino!” I don’t even remember how I found this place. Maybe I got “lost” again even before I set out to find it. :) But, I’m so glad I did. Yes, I had to veer off the path an additional 1,500 meters but I ended up staying in this precious Spanish woman’s home all by myself tonight and we have become fast friends.

Neither one of us understands a word the other is saying but, somehow, we’ve fallen in love. She has kissed both of my cheeks about a million times. She met me at the door and gave me the hugest hug. Maybe, she doesn’t get many visitors willing to veer off the main road so she treats each one like visiting royalty. As soon as I walked through her door, she had a hot cup of café con leche on the table in front of me and a plate of pastries and danishes. I have become especially fond of anything Danish lately so I was in Heaven. She busied herself making a fresh fire in the hearth and then she sat down and joined me for “conversation” and coffee. 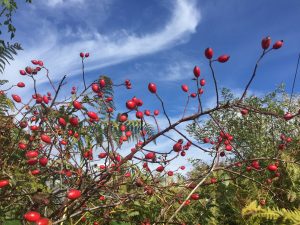 Eventually, she excused herself only to come back a few hours later with a three-course meal she had cooked to serve for me alone. I barely could drink a sip of my wine without her filling up my glass. I don’t normally eat much meat but there was no way I was going to reject her love on a plate in the T-bone form of a steak. Even as it was, she kept saying “poquito” because she thought I didn’t eat enough. She asked me what time I wanted breakfast and I tried to tell her 7:00 but she would have nothing of it. She insisted that the sun wasn’t even up by then and that she wouldn’t be up that early and that I didn’t need to be out on the road under the moon. So, as much as I’ve loved my sunrise starts, I guess it has become too much of a rut and I will be making some new synapse connections tomorrow. I may not even get lost this time. 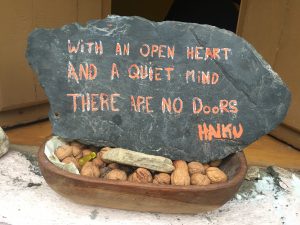