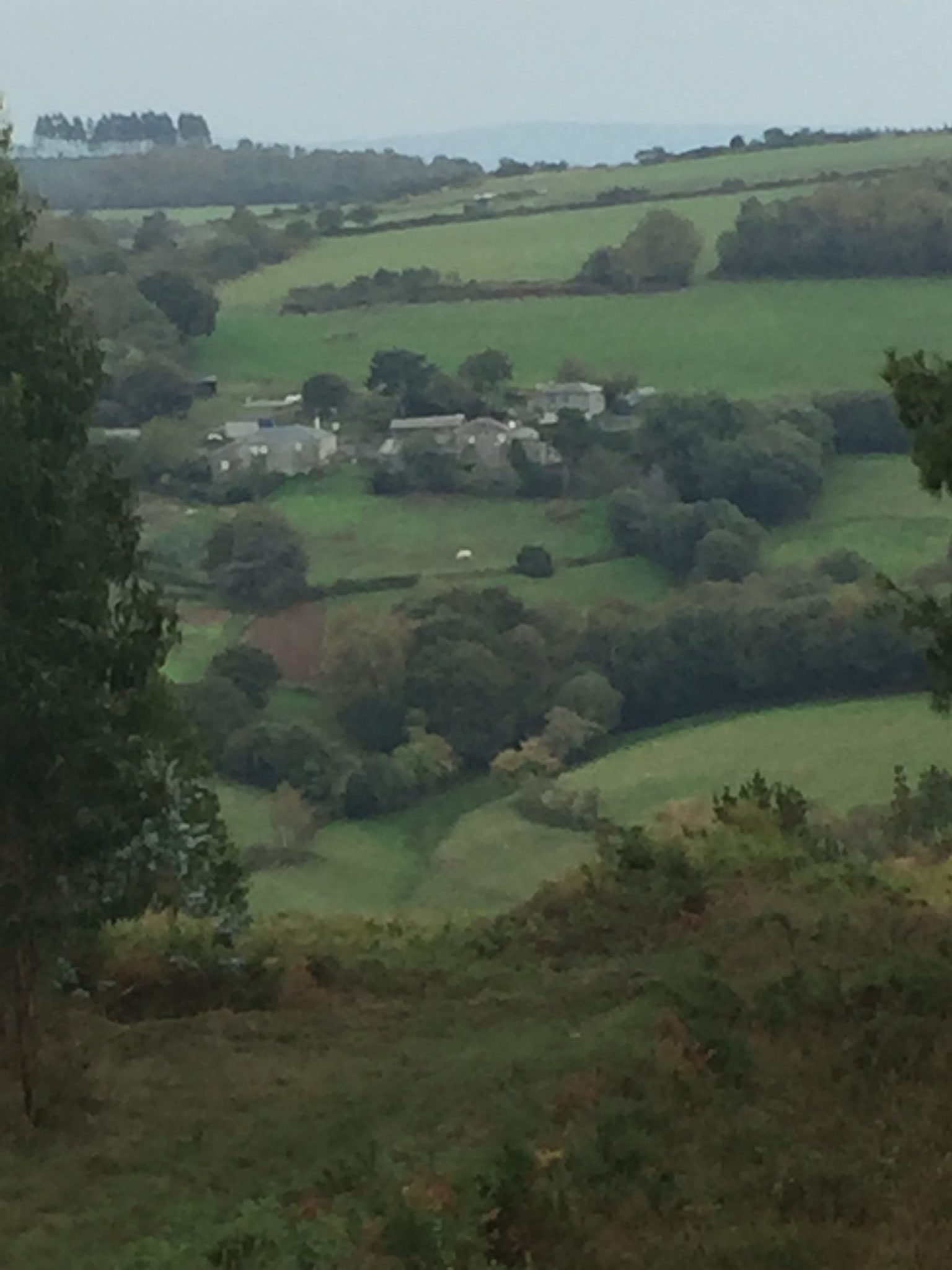 I headed out this morning before dawn but had been walking a couple of hours before I even realized the sun had come up. I was so lost in my head I was barely aware of my surroundings. Such a shame! The Galician landscape is breathtaking. Unfortunately, my thoughts were upstaging the beauty and stealing the scenery. 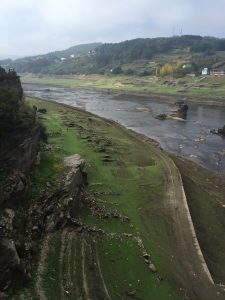 At first, I didn’t realize that God was attempting to get me out of my incessant mind loop by sending various interruptions. I was just annoyed by them! For starters, there are four women who walk together every day and talk nonstop – loudly. Sometimes, they sing show tunes – loudly. Today, they exited a café and stepped right in front of me and started playing some kind of game where they attempted to name countries in alphabetical order – loudly. I sped up to walk past them but their voices followed me and overtook my walking speed for another kilometer or so. 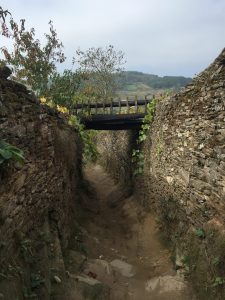 I finally outran their sonic boom just as I came upon a young man who was playing a rotation of songs on his iPhone for his mother. I was immediately perturbed – this is completely against Camino etiquette. If you’re going to listen to music (which is looked upon with haughty condescension) then certainly use ear buds! But, noooooo…he was playing his playlist full blast – on his tinny treble phone! As I sped up to attempt another overtaking, I realized he was definitely somewhere on the autism continuum. 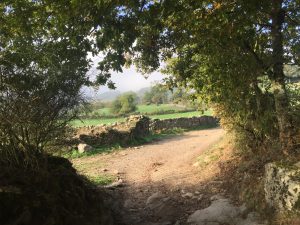 At this point, my heart softened and I was especially touched by his mother’s attention as she listened patiently to his verbose commentary, “This is Judas Priest, mom, I really like them. They are a band, not a man. That’s their name. They sing about zombies and ghosts. This one is my favorite. But, you probably won’t like it. You might like The Grateful Dead. Let me play you one of their songs. They aren’t about zombies. They sing about drugs, I think. You may not like them either. You will like Bob Dylan. Do you know him? I like him. But, not as much as I like Cat Stevens. Oh, wait, let me play you my favorite song about God. You will like that one.” He then proceeded to blast Peter Gabriel’s song, “In Your Eyes.” 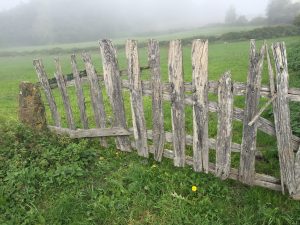 I thought to myself, how sweet, he thinks this song is about God. That’s because he is young. Anyone living in the eighties knows it is the love song that was played on the boom box in the movie, “Say Anything.” I couldn’t help listen to the words, especially, considering they were all but being held over his head like John Cusack did in the movie. 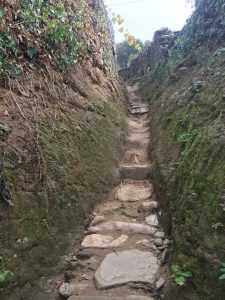 The more I listened, the more I realized this song was about God AND it was a song about lower-case love, too, and how what a healing gift they both are when we feel lost and they draw us back home. I melted and kissed this sweet, loud boy and spoke a blessing over his loving, quiet mother in my heart as I passed. 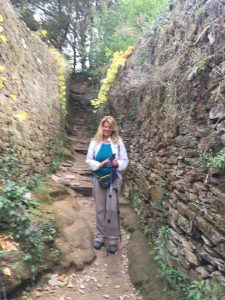 I decided to take a cue from my special angel on the road and listened to my iPhone songs on shuffle (although, I did use my ear buds.) Music is most certainly the language of God in so many ways. I saw a post on my Twitter page today that said, “When you’re happy you enjoy the music. When you’re sad you understand the lyrics.” So true. 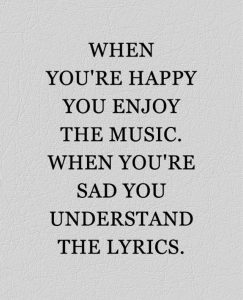 After a while of soaking in melody and melancholy, I realized I was wanting the music to drown out my thoughts. I recognized this pattern and have wanted to use the Camino to break unhelpful patterns of suppression, denial, numbing and escape. So, I unplugged and listened to the soundtrack of nature. It was so calming, so peaceful.

At first, I listened to the birds singing. Then, I noticed how many different bird songs there were. I needed two hands to count the variety of unique melodies. And, yet, they didn’t compete or cacophony. They blended into a sweet symphony. The bug sounds joined in. I don’t know what kind of insects were making the sounds but they harmonized perfectly. I listened deeper: the leaves shivering on the branches, the river dancing across the rocks, my footsteps sloshing in the mud, my trekking poles click-clacking on the stones, a dog barking at a tractor humming. I lost count after a dozen uniquely beautiful sounds all vying for my attention, yet, completely lost on me while I was lost in my thoughts. Again, what a shame. 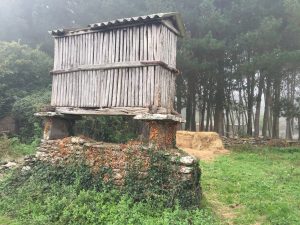 I decided to try this experiment with my other senses. How many different smells was I missing? Oh, the fresh, dusty, salty smell of hay. The all-pervasive odor of bovine in the pastures. And, yes, the manure plopped along the Way. The musky, mustiness of earth, the chlorophyll sweetness of grass, the distinct scent of dry soil newly baptized by sprinkling rain. 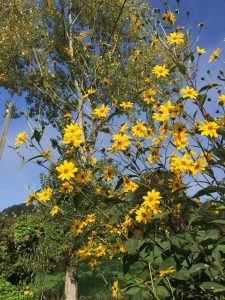 It felt so good to be back in my body and out of my head. From here, it was easier to recognize how I was feeling physically and, perhaps, from there I could drop down another layer to how I was feeling below my senses. Well, my body was certainly raising its hand (among other body parts) for my attention. My feet were the loudest. Who knew the heels could carry so much internal noise. My shins still squeal after I’ve been walking for half a day. This morning, that place between my shoulder blades was burning and my hips were in verbal protest, as well. 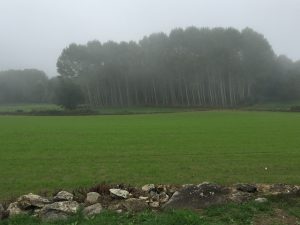 What about other, less insistently vocal, body sensations? Hmmm…how would I describe that snot that hangs just on the inside of your nose that doesn’t quite run out but is simply on standby and makes your nose cold from the inside-out? Kind of like a built-in swamp cooler for the body. Then there is the outside-in chilled nose that feels kind of like a moist puppy’s snout. The wind feels like a gentle lover’s touch brushing the hair away from my face. And, sometimes, I swear I’m walking through an ocean stream of air. I mean, there are different temperature pockets of varying degrees all along the way. I can walk a few steps and it is chilly and then within a few more meters it feels almost muggy. What causes that? It really does feel like swimming in the ocean through icy cold seas then bathwater warm water only it is all around me like I’m deep sea diving in the air, submerged in the invisible realm. 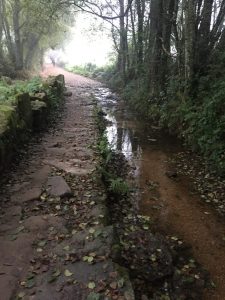 It’s amazing to me how much more present I felt at the end of the day than I did this morning. I missed so much of the gift of this leg of the Camino by walking around inside my mind looking for answers to questions that hadn’t even been asked yet. I’m grateful for God’s gentle (and not-so-subtle) taps on my shoulder to get present, to stay in my body, to pay attention to his angels, to stop playing the virtual reality game in my mind and enjoy the humus and humanity of incarnational life all around me and inside me.